What’s The Next Big Genre For Electronic Dance Music?

Electronic Dance Music is known for its many, many (and I mean MANY) sub-genre’s. In the past decade we’ve seen genre’s like House, Techno, Dubstep, Deep House and even DnB, climb the charts and trump everyone else. However, as these new genre’s climb, genre’s like Trance, Progressive House, Electro, and most of all; Breaks, fall. Now we pose the question: What’s the next big genre for Electronic Dance Music? In order to answer this question we need to take a look at the history of Electronic Music itself.

In the late 70’s we saw a MASSIVE boost in this new, so-called genre ‘Disco’. Disco music heavily incorporated new types of drum machines, synthesizers and audio editing, all for one purpose – to make people DANCE! Out of this new genre we saw huge artists come to the forefront; dominating the charts, The Bee Gees, ABBA, Earth Wind & Fire, and of course we can’t forget the legend himself, David Bowie. These artists were all innovators of Disco and heavily influenced Electronic Music to become what it is today.

As the 70’s were coming to an end we see a new genre emanate from Disco itself. 80’s Pop A.K.A. Synthpop. This genre was filled with new tones and helped evolve electronic music with the new use of MIDI. This new technology allowed producers to take bigger risks, allowing the genre to grow into its new phase, bringing some of the best artists: Michael Jackson, A Ha’s, Depeche Mode, Madonna, and Duran Duran.

Now we come to the 90’s: The true boost of Electronic Music no one saw coming. With the huge technological leap of the 80’s, newer and greater genre’s were able to expand. We saw “edgy” producers push the envelope, bringing us Techno, House music, Dub, Trance, and Techno. With Detroit at the forefront for Techno, there seemed to be no short supply of talent ranging from Belleville Three, Rhythm is Rhythm, and of course Frankie Knuckles.

The turn of the millennium is where we see the biggest boom of technology in all of the music industry itself. Computers have now become a common household item, the internet is raging with music production forums that you could study for hours. Commercial studios start becoming a thing of the past, digital audio workstations now become an affordable software for bedroom producers to up their game. Hardware gets replaced by software. This is when you see creativity flow out around the world; where you start to see major genre’s pop up. Any average college kid could spend $1,000 and have a full working studio in his dorm room! With all of this power sitting in the palm of creative minds, you can see how this story is going to unfold. More musicians get to express their feeling through their music, and ultimately, allow themselves to push the envelope further than we’ve ever seen. By 2005, we see a massive spike in Electro tracks topping the charts. Why is Electro becoming so popular? Because more creatives are using this technology to their advantage, allowing them to edit and tweak audio like we’ve never seen; creating beautiful glitchy messes that you can’t help but jump to. New sub-genre’s like Tech-House are breaking out, coming straight from the Detroit Techno scene. Progressive Housebranching off from House, and eventually, Deep House dominating all of house music. You start hearing new Trance styles coming out; Epic Trance, Psy-Trance and Uplifting Trance. In 2007 we start hearing angry, vicious growls emanating from this new genre, “Dubstep” straight out of the UK Garage scene. 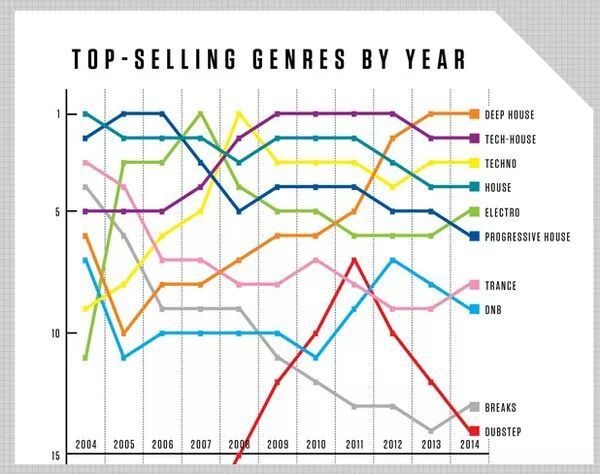 As we enter the 2010 era Dubstep is starting to hit its prime. Major artists like Skrillex, Rusko, Excision, Flux Pavilion and Bassnectar get way ahead of the game. These guys are killing the scene and more listeners are eager to hear these dirty, grimy and utterly gnarly bass sounds. As 2013 rolls around we start to hear a new reinvention of House music. DJ Tchami and Oliver Heldens are battling it out on social media over “who created Future House?” From Future House, Future Bass is born and Bass House branches off from Future House! With the creation of these genre’s we get more incredible new talent like Don Diablo, Malaa, Mike Williams and Curbi. It’s almost like there’s a never-ending stream of Electronic Music genres and talented new artists to take the reins! 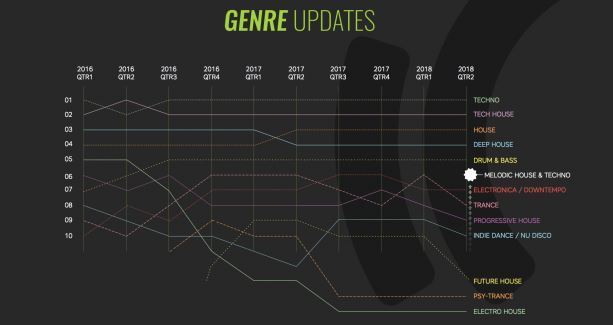 As the future scene has started to slow down over the past couple of years we still pose the same question, what’s the next big genre of Electronic Music? Well, we’re starting to see a major boost in Pop music. Future Bass is still a pretty big pool with plenty of talent to go around. Overall, I don’t think anyone can predict what the next “big” genre is… I think as Electronic Music becomes more prevalent in day-to-day life, and as technology gets better, faster and ultimately more inexpensive; newer and stronger artists will start to come up with better and more creative ways to adjust the genre’s we have today. I believe the Electronic Music scene has yet to see what it can create and what amazing tracks can come from the massive tree of genre’s.